Top 45 Autos Trends in July
Next
Set of
Related
Ideas 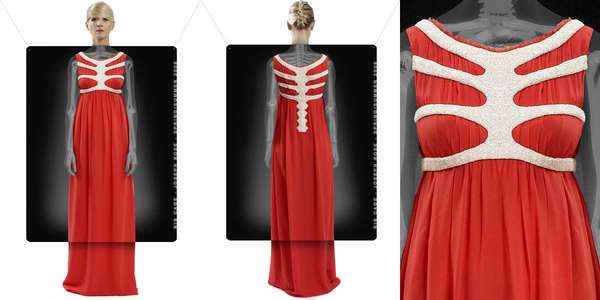 jelalyn — June 27, 2008 — Fashion
References: ronaldabdala & stylebubble.typepad
Share on Facebook Share on Twitter Share on LinkedIn Share on Pinterest
For his first RTW collection, designer Ronald Abdala rode the skeleton concept bandwagon to come up with the “X-ray” collection.  The Lebanese designer not only created his clothes with a skeletal theme in mind, but also presented them in a similar theme using x-ray pictures as the background.

The Lebanese designer intended to glamorize the human anatomy in his Autumn/Winter 2008-09 collection using avant garde cuts and intricate design techniques. Beaded hearts, spine and rib cages add feminine appeal to his edgy pieces.  His design philosophy, which is prominent in his recent collection, is “strong contrast of elements: delicacy and strength, and fluidity and severity.”

Prior to his “X-ray” collection, the 28-year old designer had already successfully draped his way into the Lebanese fashion market. With the debut launch of his RTW collection I won’t be surprised if his name soon becomes a global sensation.
4.2
Score
Popularity
Activity
Freshness
Get Trend Hunter Dashboard