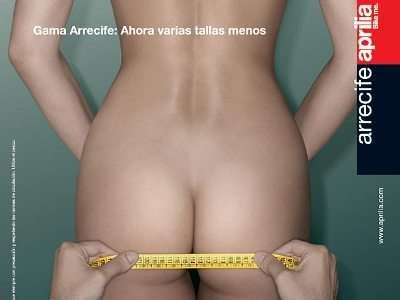 Going Like Sixty — January 12, 2009 — Naughty
References: popgive
Share on Facebook Share on Twitter Share on LinkedIn Share on Pinterest
In the past, banned ads, let’s call them banvertisements, never saw the light of day outside the agencies in which their were conceived. With the internet, however, this has changed. The ads above, for example, include images that did not make the cut for clients due to their shocking qualities, yet thanks to the web, these images are now enjoyable for web surfers around the world.

Measuring a woman’s buns was rejected for an Italian motorcycle campaign; a Kiss tobacco ad was rejected in Israel for looking too much like people; an Energizer ad was killed in Chile; UK complaints about Blair looking like Hitler in an ad caused the campaign to be pulled; Tom Ford’s provocative ad was too blatant for many countries; an ad for the Breast Cancer Fund was rejected because the scar was too realistic; cigarette butts resembling the Twin Towers didn’t make the cut for an ad for an anti-smoking ad in China; Need More Air featured a blow up doll and was rejected by the client; Gi got the boot in Ireland for being too graphic; and an “unknown” person created the Puma ads featured, which show an overly excited male.
6.6
Score
Popularity
Activity
Freshness
Access Advisory Services