Into Darkness-Inspired Makeovers
Next
Set of
Related
Ideas 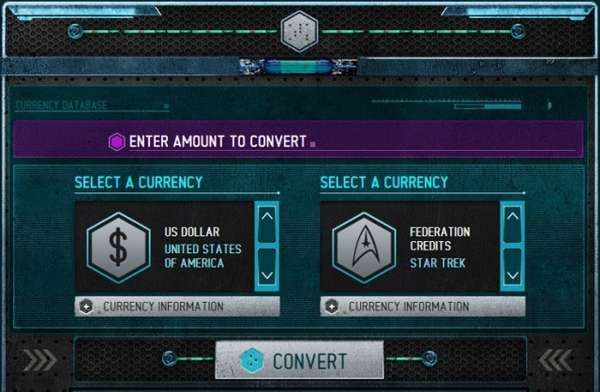 Michael Hines — July 2, 2013 — Pop Culture
References: moneyinadvance
Share on Facebook Share on Twitter Share on LinkedIn Share on Pinterest
There's a great chance that the sci-fi currency converter will be your new time-suck. This awesome tool was created by Money in Advance and lets you convert real-life currency into fantasy money. Oh, and you can also convert fantasy money from one world to another -- yes, it's that serious. A few of the many films, movies, books, etc covered include the 'Fallout' video game series, 'Star Trek,' 'Harry Potter' and 'Judge Dredd.'

Surprisingly, a decent amount of thought went into the sci-fi currency converter. There are explanations as to why each currency is valued as it is. Currency from the real-world includes U.S. Dollars, Euros and Pound Sterlings. You can also embed the sci-fi currency converter. Here's hoping Amazon gets with the program.
0.4
Score
Popularity
Activity
Freshness
View Innovation Webinars