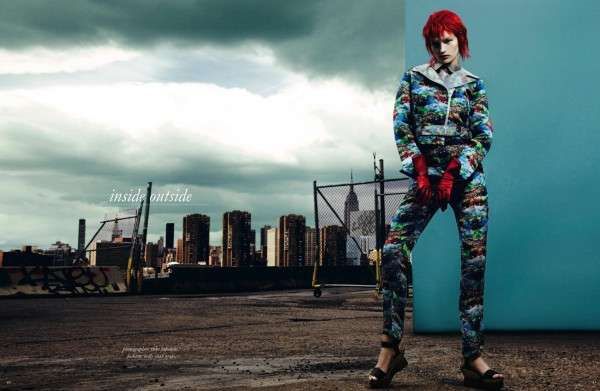 The Schon! Magazine 'Inside Outside' Photoshoot Stars Ali Lagarde

Meghan Young — July 4, 2013 — Fashion
References: trendland
Share on Facebook Share on Twitter Share on LinkedIn Share on Pinterest
The Schon! Magazine 'Inside Outside' editorial appears to channel the dark clownish nature of Batman's Joker. Considering that it uses the gritty, graphic backdrop of New York, which most people know inspired the existence of the fictional Gotham City, the comparison is only natural. As for the outfits, they are colorful and eccentric in an edgy way.

Shot by photographer Yuki Takeuchi, the Schon! Magazine 'Inside Outside' editorial stars model Ali Lagarde. Appearing in the summer 2013 issue of the magazine, the funky wardrobe was put together by stylist Holly Suan Gray, who pulled an eclectic range of pieces from the likes of Marni, Ohne Titel and Henrik Vibskov. Focusing on layers and bold patterns, the outfits contrast nicely with the grey skies.
4.2
Score
Popularity
Activity
Freshness
View Innovation Webinars