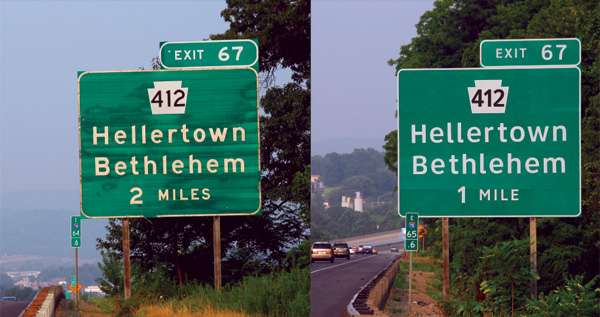 Ben Preiss — August 15, 2007 — Autos
References: clearviewhwy & nytimes
Share on Facebook Share on Twitter Share on LinkedIn Share on Pinterest
Every country has a distinct highway sign font (lettering design) that adds local personality and style. In American, Highway Gothic has been the official font for the last fifty years. It was designed before there were reflective paints and halogen headlamps that cause signs to get all fuzzy and hard to read at night, a phenomenon called halation.
Don Meeker, an environmental graphic designer, and James Montalbano, a type designer spent more than ten years tweaking and testing the typeface they call Clearview and running down Federal bureaucracies until they convinced enough of the right people that they had a winner. As old Highway Gothic signs are coming down new Clearview signs are going up. Most people won't notice the change but the signs will be easier to read at night and from at least 200 ft (60m) further away. Even AT&T adopted Clearview for all its advertising and corporate communications and in a follow-up survey, positive consumer response to its brand name had doubled.