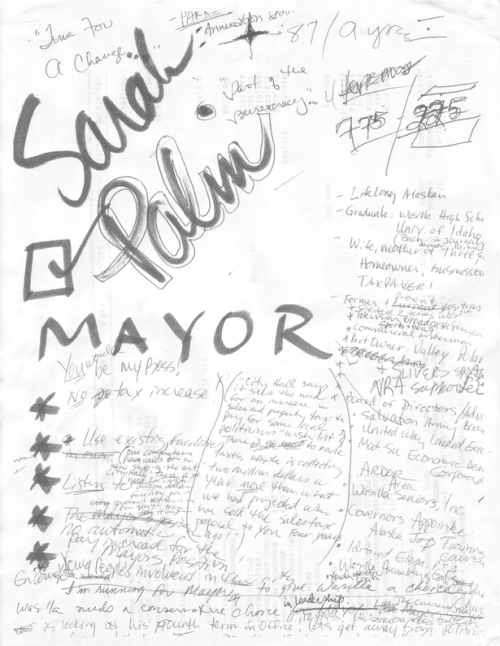 Going Like Sixty — October 7, 2008 — Social Good
References: community.post-gazette
Share on Facebook Share on Twitter Share on LinkedIn Share on Pinterest
Sarah Palin. Damien Hirst, Picasso, me, you. What do we all have in common with people like Sarah Palin? Well, for one, we all doodle when bored. Doodles from Sarah Palin’s days as Mayor of Wasilla have surfaced, and their buzz over them points at the extreme obsession with political celebrity. People are hungry to see the mayoral campaign themes that Sarah Palin doodled on the back of a city budget.

Sarah Palin’s qualifications are (according to the doodles) “life-long Alaskan” “NRA supporter”, “taxpayer.” Sarah Palin thought her theme might be “time for a change” or “you would be my boss.”

Speaking of political celebrity, Sarah Palin’s beauty pageant evening gown video recently surfaced too. So exciting to live in these times, where the equivalent of doodling - surfing the web looking for Sarah Palin videos - is so popular.

Damien Hirst recently sold some doodles to benefit charity and Picasso doodles have been sold for millions at auction. DaVinci’s doodles eventually became sketches and then more polished drawings, but it looks like Sarah Palin might need some work in this area.

Doodling is often used to interpret the interests and motivations of people. Shapes have a meaning that are inherent – the most basic shapes, such as circles, suns, and squares might be among these. Sometimes properties, such as aggression, repetition, fluidity or neatness naturally carry significance. It will be interesting to see how the doodlings of Sarah Palin are interpreted.
2.8
Score
Popularity
Activity
Freshness
View Innovation Webinars