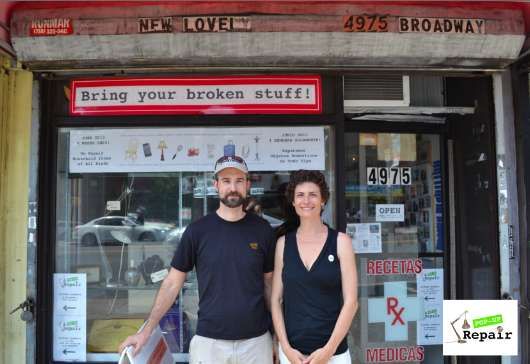 Jennifer Gosnell — July 26, 2013 — Social Good
References: popuprepair
Share on Facebook Share on Twitter Share on LinkedIn Share on Pinterest
Sandra Goldmark and Michael Banta came up with the idea to create the Pop Up Repair shop after seeing a need for it in the market. Their NYC-based experiment lasted a month and has currently come to a close. Here is an interview with Goldmark about their business idea, model and what's to come for these two.

The idea for the Pop Up Shop came about after a year or two of talking about repair and our culture's habits of waste and disposability. We had a lot of things break around our house, and were frustrated at a) having to fix everything ourselves and b) the clear lack of investment by the manufacturers and retailers in repairability, like availability of parts, etc. As we all know, our culture has reached a point where disposability and convenience dominate our relationship with material goods -- even with relatively complex and high value items like phones or appliances. Since we are not paying the real cost for these items, in terms of natural resources, fuel to ship everything all over the globe, and decent wages for the people making them, we are able to consume and dispose at an unbelievable rate. I feel like it is something we all live with, but if we stop to think about it, it is just mind-boggling, and not OK. There is no way we can go on manufacturing and consuming stuff at this rate without paying the cost at some point.

Much of the problem lies "upstream" on the design, manufacturing, and retail side of things. But one part of the equation is post-purchase. These days, even if you wanted to waste less, it is almost impossible to get anything fixed! So Michael and I, since we work in theatre -- scenery -- and know how to fix things, thought about just trying to open a repair shop. It seemed like a point in the bigger cycle where our skills could help make a small change. We did it as an experiment, to see whether people would be interested. I thought that just appearing in our neighborhood for a month would be the way to do it, first of all because we have jobs and children and limited time, and second of all because I thought it would help people get motivated to bring their stuff. Also, we weren't sure if anyone would show up!

So this first month was really a pilot program, and we learned an enormous amount. We are now working to think through what happened and how we can move forward with a longer term plan. There are a lot of things that worked really well. Above all, the community was thrilled and people showed up with bags full of broken items -- we repaired over one ton of stuff.

I am theatrical set designer and an Assistant Professor of Design at Barnard College. I design scenery and costumes in New York and regionally, and teach here in New York. Michael is a theatre technician -- he is currently the Production Manager in the theatre department at Barnard, and has worked previously in the engineering department at Hudson Scenic Studios, at NY City Opera, and in many scene shops. Together, and with our colleagues at Pop Up Repair, we have worked with an enormous range of materials and objects. Basically, when you work with scenery and props, you learn how things are made and how to fix them -- and you learn to think creatively.

So this project is, for us, not so much a career change, but an exciting offshoot. I love designing scenery, and teaching, but, not to sound too earnest, I feel that the environmental problems facing our planet are so severe I wanted to do something to directly address these challenges, however I could. This is a way to apply the skills we learned in theatre to what I think are some of the most pressing challenges we face - namely, the way that we are depleting and abusing our planet's resources. So for me, I am excited to bring what I have learned in theatre -- to value objects, to fix and repair, and to make do on a tight budget -- and to share it, offstage, with my community. In theatre, we take everyday things -- objects, sounds, lights, words - and give them a heightened meaning by placing them in the context of a larger narrative. Hopefully, by repairing people's things, we can begin to change the way we think about our stuff, and perhaps value it more and by extension, value the resources and the human craft that brought it to us.

So that is a tall order, because really we are just fixing broken chairs and lamps and fans and stuff. But it feels like a start!

I don't know -- from everything around me? I had a second child this November, and somehow this project started seeming more and more important. How could I just keep going on, business as usual? None of us can afford to do that. So I felt that I needed to do something.

We received a research grant from Barnard to study repair and consumption in conjunction with the shop, and so I have also been reading some great books recently. One is Annie Leonard's "The Story of Stuff," and another is Bill McKibben's "Deep Economy." I have also been reading some history on American consumerism, to find the historical context for our attitudes. All of this reading has been great for me.

Michael, I'm not sure! He does a lot of reading, too, but usually of a different style. He has been reading a book about the construction of cathedrals. Michael has an uncanny ability to understand the physical world and the stuff in it -- he really can fix anything or figure out how to do so. So when he reads about building cathedrals or fixing iPods, I think it enriches that natural ability in him.

And of course, the shop was kind of like a show. It was a bunch of theatre people with a really challenging task, with an opening day and a closing day. So we all pitched in and did what we know how to do, which is an enormous amount of work, in close quarters, without a lot of money. We had a great time.

That is an interesting question. I struggle with that one a lot, since every time I do a show I have to find new inspiration and not get stale. I definitely read a lot. I try to find as much time as I can to NOT work. And now that I have kids, I really have to keep that time protected. I try to do lots of different projects -- working across fields is very helpful, it helps me see the connections between things and keeps me excited about what I do.

As for Michael, I'm not sure! I will say that he too likes to do different projects. Right now, for example, I am with my family and he is working at a medieval construction site, where they are building a castle using only techniques from the middle ages (we are in France right now, btw).

And I used to run a lot, though now I sometimes have to walk instead! I live in New York, so I don't have as much outdoor time as I would like, but I would say that that is a great thing for resetting -- being outside and walking, running, or swimming. Though naps are pretty good, too!
2.6
Score
Popularity
Activity
Freshness
Get the 2023 Trend Report FREE

Yahya Fallah, CEO of Equal for All (INTERVIEW)
Learn More about the Socially Driven Business Model