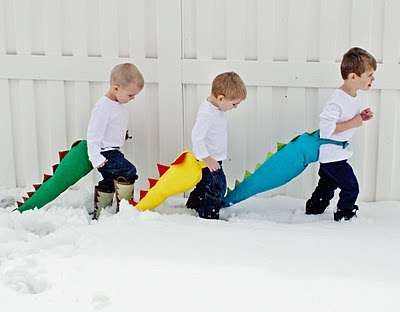 This ‘Running With Scissors’ Dinosaur Craft Will Keep Toddl

Erin Kirkpatrick — May 2, 2013 — Art & Design
References: running-w-scissors
Share on Facebook Share on Twitter Share on LinkedIn Share on Pinterest
At one time or another, everyone pretended they were a dinosaur, and thanks to this ‘Running With Scissors’ dinosaur craft, this dream can be fully realized. The Jurassic Park series and The Land Before Time films are evidence of society’s infatuation with dinosaurs.

Designed to be wrapped around the waist using two straps and a Velcro front, this toy will be able to withstand even the most energetic tot, as they roar around the living room. T-Rex, Triceratops and Brontosaurs are just a few types of the extinct creature that captures the imagination of adults and children alike.

Playtime can involve pretend scenarios of being a dragon or a dinosaur and saving the damsel in distress from a castle or involuntary capture. The Running with Scissors dinosaur craft also features the adorable detailing of spikes on top of vibrant colored tails. If you make this outfit for your child, get ready to receive the 2013 Parent of the Year Award.
4.8
Score
Popularity
Activity
Freshness
Get Trend Hunter Dashboard