Rolling Robot Takes The Tunes With You, Thanks To The Ipod 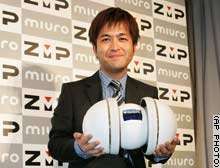 The 14-inch-long machine from ZMP Inc. blares music as it rolls and twists from room to room. The robot, which looks like a ball popping out of an egg, has a speaker system from Kenwood Corp.

Apple Computer Inc.'s iPod player locks into the top of the robot, which comes in white, black, yellow or red.

The $930 Miuro -- short for "music innovation based on utility robot technology" -- responds to a handheld remote control. It receives wireless signals from a PC to play music from iTunes and other programs.

At a demonstration in Tokyo, the 11-pound Miuro did a preprogrammed vacuum-cleaner-like dance, rolling about and pivoting to music.

"I designed it to have a gentle look because it becomes a part of everyday life by integrating robotics and music," Hara said.
2.9
Score
Popularity
Activity
Freshness
View Innovation Webinars