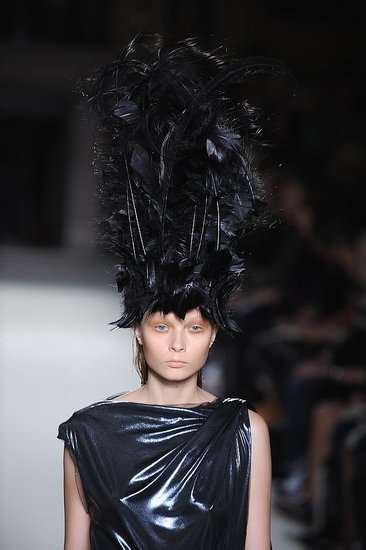 Jacqueline Parrish — September 23, 2009 — Fashion
References: roskandailincic & coutorture
To create Roksanda Ilincic's Spring 2010 collection, it appears as if the designer has carefully murdered hoards of ravens and blackbirds, stripping them of their feathery garb and ever so skillfully turning them into clothing.

The feathers were seen on everything in Roksanda Ilincics Spring 2010 collection, from skirts and dresses, to the platform shoes, shawls and a very imaginative head-piece sort of like the feathered version of the hat that accompanies the uniform of the Queens guards.

While it made for a stunning collection, personally, I prefer my birds alive and chirping as opposed to hanging dead around my neck.
2.1
Score
Popularity
Activity
Freshness