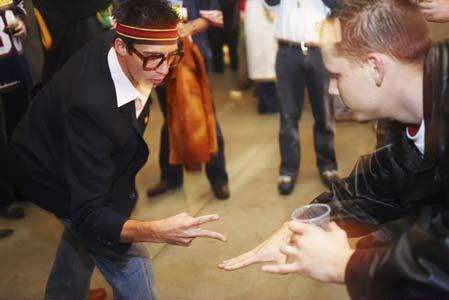 Hernando Gomez Salinas — September 23, 2006 — Tech
References: worldrps & theuncoolhunter
Share on Facebook Share on Twitter Share on LinkedIn Share on Pinterest
The traditional game "rock, paper or scissors" is considered a children's game but some adults use it to solve their problems and it is also a â€œsportâ€ controlled by an international association and it is played in tournaments in many countries.

According to several sources, the highest authority in RPS is the World Rock Paper Scissors Society located in Toronto, Canada (with branches spread in several countries).

This society regulates and promotes this sport and it also organizes conferences, an annual retreat for those who practice this sport and monthly tournaments in clubs and institutions, apart from the World Championship that will take place in Toronto on November 11th.

The world champion will get a juicy prize of USD 7,000 and the glory and respect of all the fans of â€œrock, paper, or scissorsâ€.

According to the specialists, in this sport two players must be face to face and after saying â€œrock, paper, or stoneâ€ at the same time, they must show a hand showing the gesture of the weapon at the same time. Rock is represented with your fist, paper is gestured by showing your hand and separating the fingers and scissors are represented by showing your forefingers and middle fingers making a â€œVâ€.

In order to know the origins of this game we must search among the members of the Society in the year 200 BC and it comes from Japan where the game is known as â€œJan-Kenâ€ just like in Peru and Brazil. This sport must have migrated to Europe about the middle of the XVIII century.

Other theories say that the game has its origins in Africa and Europe but there is no doubt of its universality. In Indonesia there is a version of this game known as â€œJan-Kenâ€ while it is called â€œCachipÃºnâ€ in Chile, â€œMook-Chi-Paâ€ in South Korea and â€œPiedra, Papel o tijeraâ€ in Argentina.

Some researchers have attributed abstract symbolisms to the stone (power, strength, aggression), to the paper (passivity, caution and wisdom, also money) and to the scissors (perversion, evil, and technology).

Nowadays the researchers are looking for the origins of another ancestral sport: the â€œbread and cheeseâ€ and it consists of performing a sort of duel between the captains of two soccer teams before starting an amateur match. The main goal is to choose the players for each team. The winner of â€œbread and cheeseâ€ has the right to choose the best player.
5.5
Score
Popularity
Activity
Freshness
Get Trend Hunter Dashboard

50 Rocking Fashions
Rockstar Innovations to Bring Out Your Heavy Side