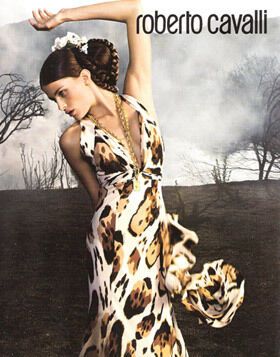 Bianca — June 5, 2008 — Luxury
References: robertocavalli & catwalkqueen
Share on Facebook Share on Twitter Share on LinkedIn Share on Pinterest
If Roberto Cavalli's designs had to be summed up in two words, they'd be "wildy feminine." Regardless of the year or season, his collections are always heavy on animal prints, while still continuing to be innovative in design and always flattering to the female form.

The images from Cavalli's Fall/Winter 2008/09 ad campaign shows the next season is no exception. The photographs, which were captured by Inez and Vinoodh, star 24 year old Brazilian model Isabeli Fontana in a variety of stunning outfits, many trimmed with fur.

While the only image of the campaign released thus far is the first in the gallery depicting an elegant dress in the designer's iconic safari prints, the rest of the images show pieces from the fall/winter 2008 collection, as seen on the runway.
4.8
Score
Popularity
Activity
Freshness
View Innovation Webinars

Bluetooth Broadcasting Dongles
The Twelve South AirFly 2 Works on Planes, at the Gym and Beyond