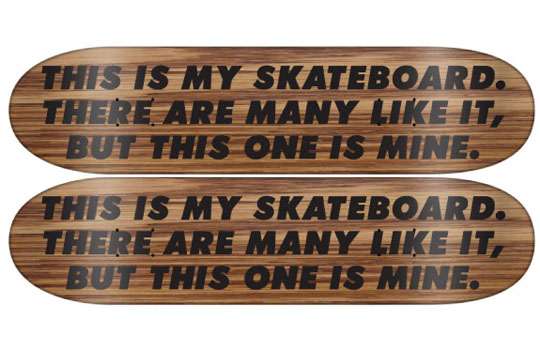 The RAW Spring 2012 Board Graphics are Simple and Spunky

Sophia Pelka — April 12, 2012 — Lifestyle
References: rawnewengland & english.mashkulture.net
Share on Facebook Share on Twitter Share on LinkedIn Share on Pinterest
The RAW Spring 2012 collection of decks boasts minimalist graphics based on the premise of lifestyle and brohood in skating. The headlining board boasts an big all-American allusion. The deck reads, "This is my skateboard. There are many like it, but this one is mine." The deck was inspired by the Rifleman's Creed, which was written by Major General William H. Rupertus during World War II. The Creeds is essential to the United States Marine Corps doctrine. It outlines the deep connection and relationship a soldier has with his rifle, reading "My rifle is human, even as I, because it is my life."

The relationship is easily transferable to skating life. A dude and his board are best friends, compadres, amigos. The poetic skate deck is available in several sizing options. The Spring line also features cruiser styles, and a memorable Viper deck that reads 'Loyalty Over Royalty.'
1.5
Score
Popularity
Activity
Freshness
Get the 2021 Trend Report FREE