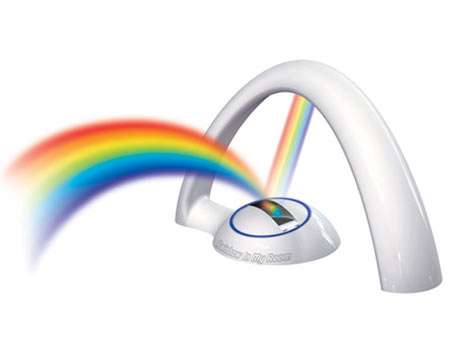 Pearl — July 18, 2008 — Life-Stages
References: perpetualkid & geeksugar
Share on Facebook Share on Twitter Share on LinkedIn Share on Pinterest
This motion activated projector can conjure up a rainbow on demand via an LED light. It is sure to delight all of us when we're not lucky enough to see a real one. Children and those young at heart will enjoy this product.

Today we regard rainbows as pretty and we know there are no pots of gold at the end. We also understand how they come to be - the tiny raindrops refract the sun's rays to give us colorful arcs in the sky. Yet rainbows were once a source of mystery and even fear.

A book called Theodoric's Rainbow by Stephen Kramer tells the story of a remarkable 13th century Dominican monk who showed how rainbows are created by using small glass prisms to simulate raindrops and thus scatter light. His work is the one of the earliest examples of how scientists use models to study the irreproducible.

Glory rainbows are an interesting phenomenon for they are formed when the light is scattered backwards. These can be seen from aircraft or on mountains and hills. The Brocken Spectre is a type of glory rainbow where a huge ghostly figure of the mountaineer appears backed by a halo of shimmering rainbow rings. The rainbow type was named after a mountain peak in Germany where a mountaineer fell to his death in fright when he encountered one, so the story goes. It was really his own shadow cast against a glory.