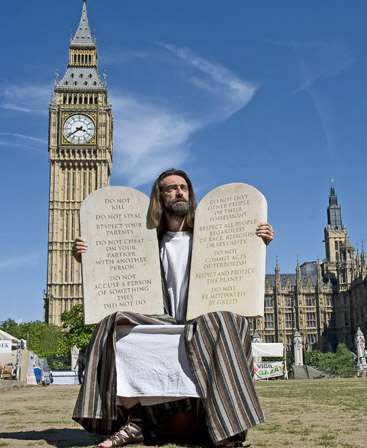 Mischief & EA Rewrite the 10 Commandments for ‘The Sims 3'

Ben Dutton — June 6, 2009 — Tech
References: thesims3 & mischiefpr
Share on Facebook Share on Twitter Share on LinkedIn Share on Pinterest
What would you do if you could play God for the day? Make yourself more attractive? Save the planet? Get revenge on an ex? This is the question ‘The Sims 3’ poses with its UK launch campaign; to make the point, the team behind the game has rewritten the Ten Commandments based on British public opinion about which commandments are still relevant today and which are just a little outdated.

As six of the original commandments remain (albeit using slightly modernized language), the remaining four were viewed as too old fashioned and irrelevant to the world we live it today. These four were replaced with common themes suggested by the British public, who focused on tackling greed, saving the planet, respecting one another and stamping out terrorism.

With the new Ten Commandments in place, the team behind ‘The Sims 3’ has recreated the stone tablets that Moses brought down from the mountain and delivered them to the Houses of Parliament as a symbol of public opinion about the moral code Brits want to live by today. Play on…
2.3
Score
Popularity
Activity
Freshness
View Innovation Webinars