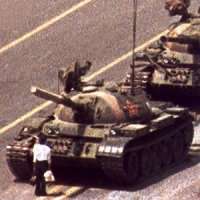 Anniversary of the 'Tank Man' in Tiananmen Square

The Tank Man's identity has never been confirmed, and his heroic actions are still being censored in China.

Fan sites are popping up everywhere for the Tank Man, including pages on social media sites such as Facebook.

Implications - In history and modern times, protests and riots are events that generate widespread media coverage and public buzz. Political oppression is something that still goes on today, and the rise of media sharing and the Internet has increased public interest and involvement dramatically on an international level. This is attributable to the ease with which the public can follow these events through live video coverage, photography, news media coverage and many other mediums or portraying information across international boarders.
2.8
Score
Popularity
Activity
Freshness
Get Trend Hunter Dashboard