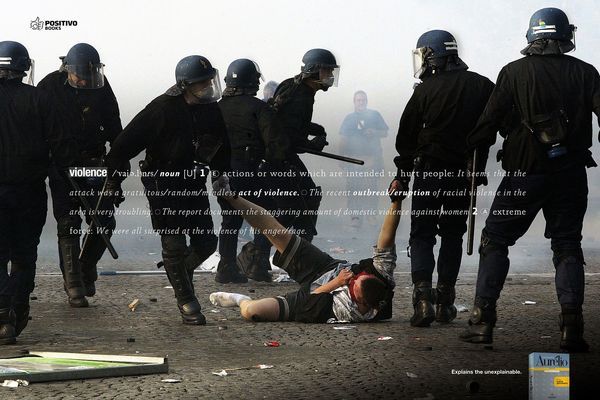 Meghan Young — February 5, 2014 — Marketing
References: masterromawaiteman.br & adeevee
Share on Facebook Share on Twitter Share on LinkedIn Share on Pinterest
There are many concepts in the world that are not easily comprehended or explained such as war, racism and violence; the Positivo Books Aurelio Dictionary ad campaign promotes a source that people can refer to when asked such tough questions. Although taking such a route may trivialize these atrocities on a certain level, sometimes what is needed are the bare facts and not the emotions that go along with such words.

Conceived and executed by Master Roma Waiteman, an ad agency based in Curitiba, Brazil, the Positivo Books Aurelio Dictionary ad campaign sets the definitions on top of scenes that visualize their meaning. A powerful campaign, to say the least, it was art directed by Eduardo Tavares with creative direction by Flávio Waiteman and Victor Afonso.
5.3
Score
Popularity
Activity
Freshness
Get Better and Faster