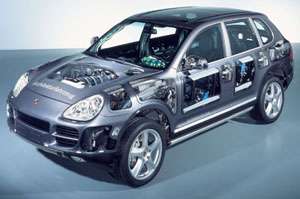 eelicious — July 27, 2007 — Autos
References: cbsnews & porsche
Share on Facebook Share on Twitter Share on LinkedIn Share on Pinterest
It could become a possibility within the next three years, and why should he not? It certainly is a sexier car and with the luxury automaker's recent announcement, we expect it to be even sexier.
After increasing pressure and negative criticism from Greenpeace, as well as other environmental groups, Porsche revealed its decision to go green. The head of the hybrid program announced that the luxury automaker, in conjunction with the Volkswagen AG and Audi AG, plans to introduce a hybrid version of the automobile within the next three years. Porsche anticipates the renovation of this four-door luxury sport utility vehicle to reduce fuel consumption by approximately one third.
Porsche has continuously rejected claims from Greenpeace, whom purportedly characterized the German automobiles as â€œClimate Pigs.â€ With the announcement of the hybrid vehicle under their built, Porsche's responds to Greenpeace via a trilogy of posters; the third and final poster stating, â€œConcluding the demonstration, Porsche could not resist the temptation to unroll a third large poster stating: â€œDear Friends from Greenpeace: Porsche is Better than You Think. But the Good News is that David taking on Goliath was Underestimated, too . . .â€