Glow In The Dark Underwear
Next
Set of
Related
Ideas 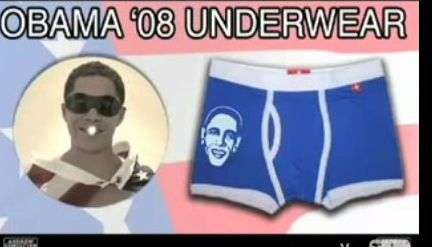 lourdes sanchez bayas — November 13, 2008 — Marketing
References: store.andrewchristian & beautyconfessional.net
Share on Facebook Share on Twitter Share on LinkedIn Share on Pinterest
Andrew Christian has been hawking his Barack Obama underwear long before the president-elect was ushered into the White House by the American people. About a month ago, Christian released the video “Obama Man Saves Sarah Palin” in a clever attempt to increase sales of his Obama boxers which feature a stylized image of Barack on the front.

“Obama Man," as you may have guessed, is a boxer brief-clad superhero who wears the American flag as his cape. The crime fighter comes to Sarah Palin’s aid when she’s being molested by a perv. But, the superhero in question here, come to think of it, is no different from other popular and iconic crime fighters such as Batman or Superman in the sense that all they wear is a cape and some (I bet) rather funky underwear.

Meanwhile, the low-cut boxer briefs which were featured in Trend Hunter a few months ago, come in different colors and are made of 100% cotton.
4
Score
Popularity
Activity
Freshness
Get Better and Faster