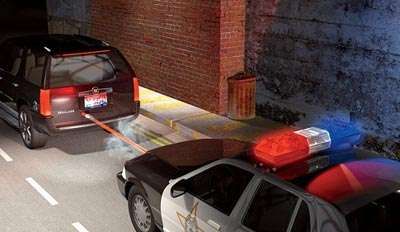 Fashion Spy — July 12, 2006 — Tech
References: starchase.org & thecoolhunter.net
Share on Facebook Share on Twitter Share on LinkedIn Share on Pinterest
Star Chase is a revolutionary new crime fighting gadget that lets police shoot GPS darts at vehicles in high speed pursuits. The result is that the dart can be traced, enabling law enforcement to catch criminals without risking the lives of innocent drivers on the road.

"In fact, there are more than 100,000 high-speed pursuits in the U.S. every year, endangering everyone involved in the chaseâ€”the suspects, the police, and the public. And it's an unnecessary danger; up to eighty-five percent of these pursuits are initiated by non-violent offenders. Plus, the economic impact is staggering, with hundreds of millions paid out in the U.S. annually, due to insurance payouts, medical bills, workers' compensation and lost wages." - Star Chase
3
Score
Popularity
Activity
Freshness
Get Better and Faster