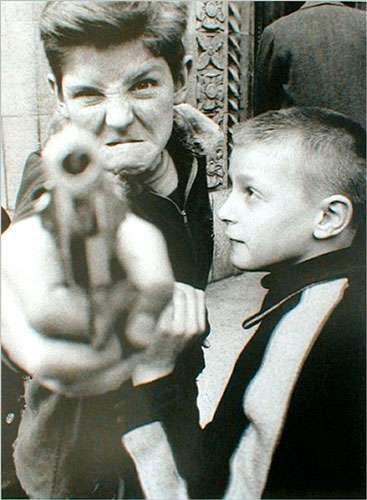 Jordan Sowunmi — August 28, 2011 — Fashion
References: lifelounge.au
Share on Facebook Share on Twitter Share on LinkedIn Share on Pinterest
Photographer William Klein began exploring his creative impulse for still photos in Paris and New York City after World War II. Some 70 years later, street photography is become of fashion blogs and magazines across the globe. Looking through his selected portfolio, it's clear that Klein had the ability to capture authentic, gritty emotions is what has helped him establish a lengthy career.

As a photographer, William Klein's street snaps feature natural lightning, a diverse collection of subjects, and a certain big-city spunk that would attract interest from even the most jaded of viewers. My favorite image in the William Klein collection features a young boy brandishing a handgun, his eyes squinting in an attempt to perfect his aim. Behind him, a younger girl stands, her mouth agape in fear. As a photographer, William Klein shows his searing eye for the right moment in snaps like this.

Click through his gallery to see why his career has lasted over 60 years.
6.8
Score
Popularity
Activity
Freshness
Jeremy Gutsche Keynote Speaker