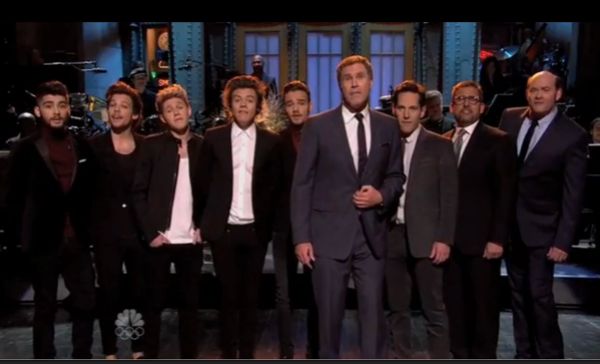 The One Direction and Paul Rudd SNL Monologue was Delightful

Alyson Wyers — December 8, 2013 — Pop Culture
References: cambio & buzzfeed
Share on Facebook Share on Twitter Share on LinkedIn Share on Pinterest
The Paul Rudd SNL episode that aired on Saturday, December 7th had musical guest One Direction singing 'Afternoon Delight' with the core cast of Anchorman 2. The epic episode was the third time Rudd hosted the live comedy sketch show, which he notes in this monologue. He expressed his fear of being overshadowed by the musical guests in the past, when the world's biggest boy band emerges. To counter their popularity and musical talent, Rudd brings out his 'man band' consisting of Will Ferrell, David Koechner and Steve Carrell.