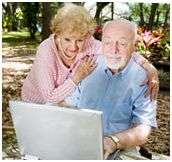 Some parents are not quite with it yet. One set of parents refer to Facebook as Flashbook and the wall as wallpaper. Mom poked you to get you up in the mornings before, now she’s poking you in Facebook. (She probably called you first on the phone to tell you she did it). Then there was the mom who wondered what a poke was - “in Lonesome Dove, a poke was something different.” That’s the least of it.

Do you want your mother calling you McAwesome for all your friends to see? One submission contained the desperate plea by a mother who complained about “Aunt Pat” being refused as a friend. Another where Mom had gotten her stripper name!

Then there are things YOU rather not know about your parents. Ewww. Or you found out through Facebook they were divorced but neglected to tell you! And what about your mum’s menopause updates?

Be warned. Soon your parents will be following your tweets.