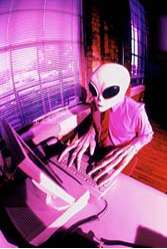 Is this an attempt to pick up alien signals?

The plan is to expand the existing web further into the solar system, a project that would come with its own set of rules and regulations. To protect us from finding out about extraterrestrial life, I assume.

At a conference in Korea, a Google rep said, “This effort is now bearing fruit and is on track to be space qualified and standardized in the 2010 time frame.

“Eventually we will accumulate an interplanetary backbone to assist robotic and manned missions with robust communication.

“Eventually,” he added, “the entire world will have access to the services that are available on the Internet.”

The internet is growing at an incredible rate: Asia has over 436 million users, Europe has 321 million, and in Europe, there are 233 people hooked up to the web.

Before they can conquer the solar system, they still have some work to do on Earth. Check out the trend on ICANN, the company that wants to begin including domain names in 11 languages outside of the Roman alphabet: