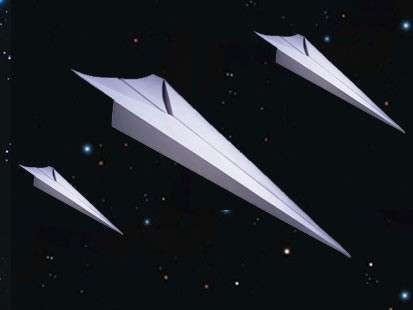 A successful flight by an origami plane could have far-reaching ideas for re-entry vehicles and space probes for upper atmospheric exploration.

"Shinji Suzuki, a professor at Tokyo University's Department of Aeronautics and Astronautics said he was skeptical a decade ago when he first discussed with experts the idea of sending into space a craft made in the tradition of Japan's ancient art of paper folding," AOL news wrote. "'It sounded like a simply impossible, crazy idea,' Suzuki said. 'I gave it some more thought, and came to think it may not be ridiculous after all, and could very well survive if it comes down extremely slowly.'"

In a test in early February, the prototype which about 2.8 inches long and 2 inches wide, survived Mach 7 speeds, broiling 446 degree temperatures in a hypersonic wind tunnel approximating it would face entering Earth's atmosphere. The only problem is there's no way to track the paper craft or predict when or where they may land. But knowing the creative Japanese, they'll figure it out.