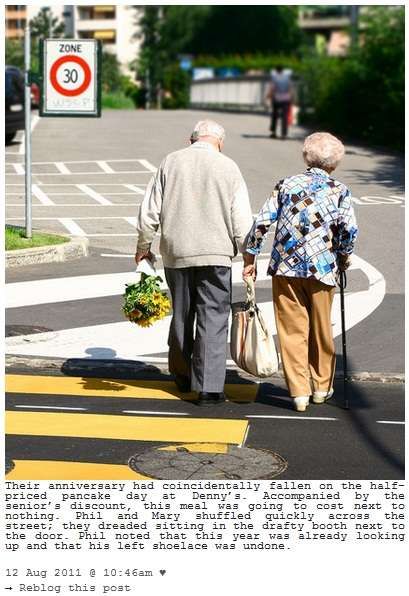 Jason Soy — August 16, 2011 — Lifestyle
References: oldpeopleholdinghands.tumblr
Share on Facebook Share on Twitter Share on LinkedIn Share on Pinterest
The Pixar movie 'Up' proved that the most adorable couples on the planet are without a doubt elderly, and this Old People Holding Hands Tumblr lets viewers who want to feel all warm and fuzzy inside look at an endearing collection of photos featuring old lovers joined at the hand. You cannot go three seconds without an obligatory “aww” when looking through the website.

If pictures of the elderly aren’t enough tug on your heartstrings, the Old People Holding Hands Tumblr also features cute little anecdotes to go along with each image, courtesy of the Tumblr’s operator, the wonderful and witty Olivia Gissing.

Those unfamiliar with the works of Olivia Gissing should head on over to her YouTube channel, ItsLiv, where you’ll be greeted with quirky videos of all comic varieties. Expect the same brand of humor to accompany each picture on the Old People Holding Hands Tumblr.

Implications - Consumers are empathetic towards images of the elderly holding hands because it invokes ideal love. This serves as inspiration for consumers while simultaneously giving them a sense of euphoria. Corporations looking to evoke pleasant feelings in their promotional campaigns may consider using images of the elderly holding hands in advertisements.
4.8
Score
Popularity
Activity
Freshness
Attend Future Festival