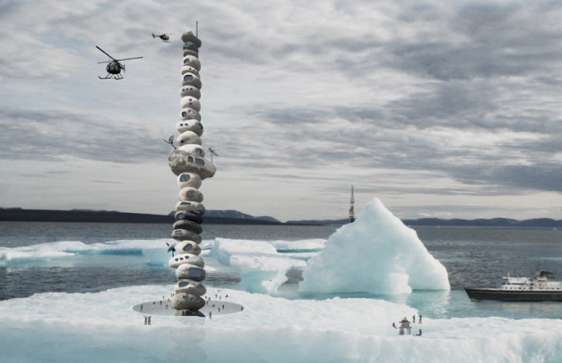 The Nunavut Tower by rzlbd is a Primeval Rocky Vertical Shelter

Amelia Roblin — May 13, 2011 — Art & Design
References: rzlbd & archdaily
Share on Facebook Share on Twitter Share on LinkedIn Share on Pinterest
Reading about the Nunavut Tower by rzlbd makes it easy to be seduced by the poetic concept behind this sort of project. Architect Reza Aliabadi is responsible for the conception of this piece of primitive future in which the primordial cave becomes a building block within a modern, vertical monument.

Several of these stoney skyscrapers are designed to be built atop the floating and shifting icebergs of northern Canada, creating dense nomadic communities, completely isolated from the rest of civilization. Lailee Soleimani had a hand in this proposal as well, and between the two creatives they've sought to extrapolate on the human obsession with obtaining height, even when limited horizontal space is not an issue.

Both condominium and resort, the Nunavut Tower by rzlbd will offer inhabitants and visitors the opportunity to escape to this pristine polar sanctuary.
2.1
Score
Popularity
Activity
Freshness
View Innovation Webinars