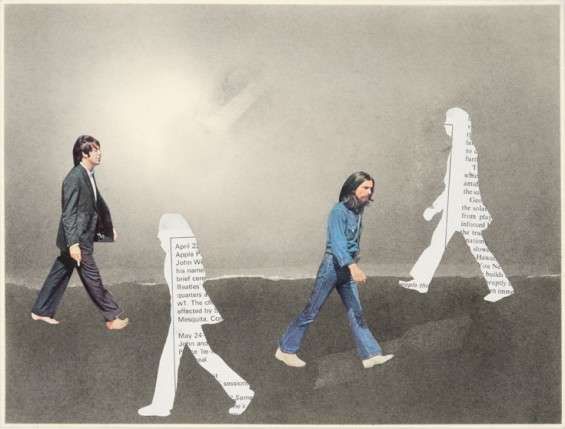 The Nils Karsten Portfolio is Full of Culturally Resonant Artwork

Jordan Sowunmi — August 2, 2011 — Pop Culture
References: nilskarsten & beautifuldecay
Share on Facebook Share on Twitter Share on LinkedIn Share on Pinterest
The Nils Karsten portfolio is full of artwork that seems to be right out of your biggest bohemian fantasy. Karsten manages to take significant cultural tropes (The Beatles, punk music, the Vietnam War) of the early 70s and 60s and makes them into collages that are both historically relevant and humorous.

The Nils Karsten portfolio features work heavily steeped in hippie history. A Hamburg, Germany native and current Brooklyn resident, Karsten earned his BFA from the School of Visual Arts in 1999 and his MFA from Vermont College in 2003. His work has been exhibited at top galleries around the world, including the Contrasts Gallery in Shanghai, China, Earl McGrath in Los Angeles, California, and the Pera Museum in Istanbul, Turkey.

Looking through the Nils Karsten portfolio, it's clear that the artist was heavily influenced by the trials and tribulations of hippie-era musicians and youth. My favorite image in the Nils Karsten portfolio features George Harrison walking on stilts. The image is a physical representation of the lofty status the Beatles held in pop culture then, and now. It's a minor comment on how bohemian society deified these musicians and made them larger than life.

With work like this, it won't be long before Nils Karsten's artwork reaches the larger than life status his collage image of George Harrison effuses. Nils Karsten's work was most recently exhibited at the Ubu Gallery in New York.
1.3
Score
Popularity
Activity
Freshness
View Innovation Webinars