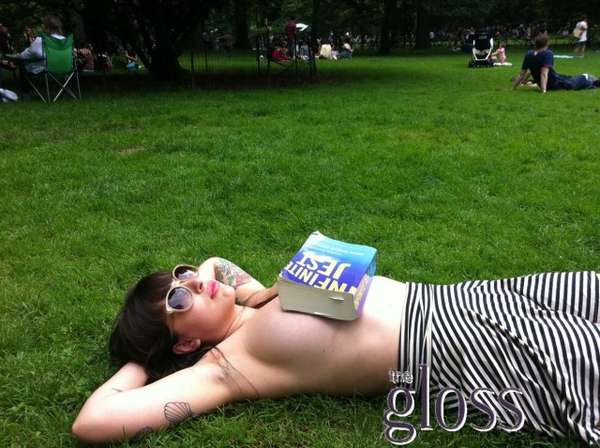 Marie C. Hudson — July 3, 2011 — Naughty
References: thegloss
Share on Facebook Share on Twitter Share on LinkedIn Share on Pinterest
Jamie Peck, a writer for The Gloss, took to the streets of New York City topless to conduct a social experiment. After hearing about a topless woman who was wrongfully ticketed in New York a few weeks earlier, Peck wanted to experience a New York topless outing of her own.

It is completely legal for women in NYC to walk around shirtless. Peck’s experiment was both for herself, to see how comfortable she could be, and also to test the public. Many people ignored her lack of threads, as I’m sure they’ve seen far more bizarre things. She did receive warnings from NYPD and a Central Park employee, despite her actions being legal and harmless.

The summer heat and humidity make it awfully tempting to shed as many layers as possible. With July just around the corner, I’m sure Jamie Peck is not the last to partake in a New York topless outing.
6.9
Score
Popularity
Activity
Freshness
Get Better and Faster