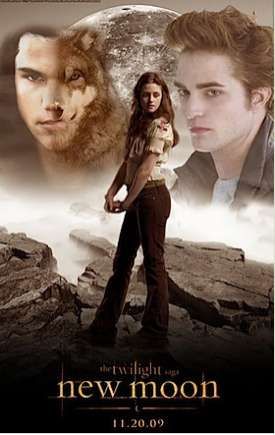 Sandra Winn — April 2, 2009 — Pop Culture
References: twilightguide & thefidelityfiles
Share on Facebook Share on Twitter Share on LinkedIn Share on Pinterest
These superb ‘New Moon’ posters featuring the Jacob, Bella and Edward love triangle--played by Taylor Lautner, Kristen Stewart and Robert Pattinson, respectively--are of such high quality that ‘New Moon’ fans mistakenly believe they were done and promoted by a movie studio. On the contrary, these ‘New Moon’ posters were fan-created.

Quite a few images from these ‘New Moon’ vampire and werewolf posters were derived from ‘Twilight’ photos, but I’m blown away by them nonetheless. I love how MP3Graphics shows Jacob as a half-man, half-wolf in photo one, as well as the other poster they did with a wolf howling while Edward and Bella embrace. The poster of a ghostlike Edward holding Bella is another one I find particularly cool.

‘Twilight’ fans who are rooting for the werewolf may be pleasantly surprised to see ‘New Moon’ posters with Jacob and Bella without a vampire in sight. Speaking of werewolves, there is even a ‘New Moon’ poster of Jacob’s werewolf pack.

Hungry for even more ‘New Moon’ fan-made posters? If so, be sure to stop by Twilight Guide and view the results of their ‘New Moon’ poster contest.
5.7
Score
Popularity
Activity
Freshness
View Innovation Webinars