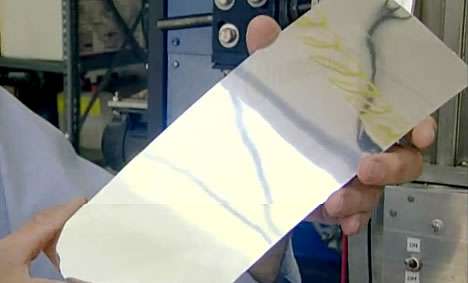 "The company, which has raised $150 million and built a 200,000-square-foot factory here, is developing a new manufacturing process that â€œprintsâ€ photovoltaic material on aluminum backing, a process the company says will reduce the manufacturing cost of the basic photovoltaic module by more than 80 percent," according to the NY Times.

At $1 per watt, solar energy becomes cheaper than coal. An entire system built of these solar panels would cost $2 per watt as opposed to $2.1 a watt, plus the cost of fuel and emissions according to the Energy Department. To lower the price, Nanosolar has concentrated on making the production process cheaper rather than making the solar panels more efficient. This is a major price breakthrough that could bring solar power to a much broader market.

28 Powerful Solar Panels
Saving the Earth, from a Sun-Powered Vatican to Doll Houses