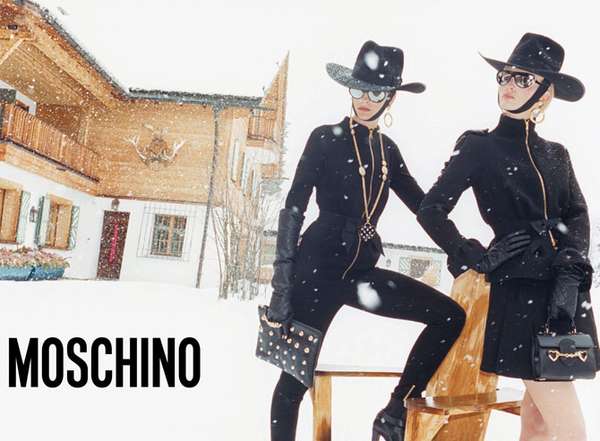 Meghan Young — August 27, 2012 — Fashion
References: moschino & fashiongonerogue
Share on Facebook Share on Twitter Share on LinkedIn Share on Pinterest
Although the fashion featured in the Moschino Fall 2012 ad campaign does have an army influence, they appear to be more inspired by Zorro than anything else. Of course, the wide-brimmed hat does have a Spanish flavor that cannot be denied. These are not the typical snow bunnies found on ski slopes, that's for sure.

The Moschino Fall 2012 ad campaign was shot by photographer Juergen Teller. It stars models Ophelie Rupp and Ymre Stiekema. Chic and form-fitting, the blonde beauties will be streaks of black, red and blue as they zip down the steep slopes. The outfits are also full of texture and gold accents, which really accentuate the richness of each ensemble. More edgy than classic, the collection is made for those looking to make a statement.
3.5
Score
Popularity
Activity
Freshness
Access Advisory Services