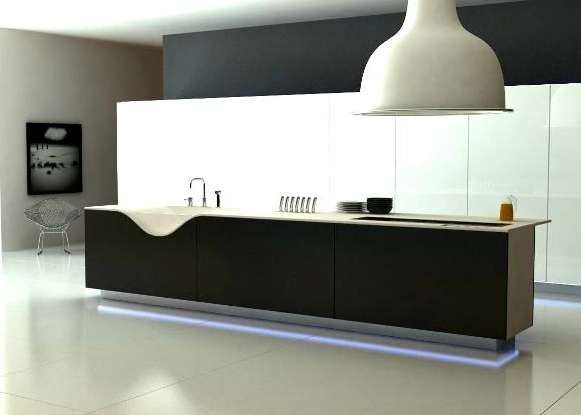 Amelia Roblin — August 9, 2011 — Art & Design
References: andreadentonidesign & designspotter
Inspiration for design can come from some rather unexpected places, and as the name of the Moby Dick Kitchen implies, its concept has compellingly come from the 19th century American novel.

Herman Melville's story centers around a whale which is the enormous marine mammal that this interior arrangement strives to celebrate. Ideal for a polished modern home with a large open-concept cooking area, this countertop island and bell-shaped range hood incorporate an understated elegance -- except when appreciated alongside such rigid straight lines.

There is an undoubted emphasis on the horizontality of this arrangement, likely mimicking the surface of the sea. Italian designer Andrea Dentoni has however incorporated an exquisite sinuous concavity for the sink basin which enhances the sculptural quality of the Moby Dick Kitchen. It strikes a visual harmony to reference the beauty of the graceful creature.
3.7
Score
Popularity
Activity
Freshness