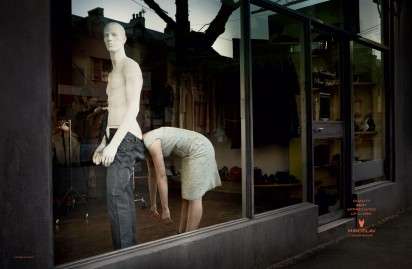 Meghan Young — May 26, 2012 — Fashion
References: mcsaatchi & ibelieveinadv
While some of the images featured in the Miroslav Underwear campaign may seem wildly inappropriate, each of them show just how irresistible this brand of skivvies really are. At first, people may assume that some very naughty behaviour is taking place. Then they might hypothesize that these humans have some kind of ostrich complex. But after reading the tag line, “Quality best appreciated up close," it becomes clear that they are simply admiring the make of the Miroslav Underwear by sticking their heads as close as possible to them.