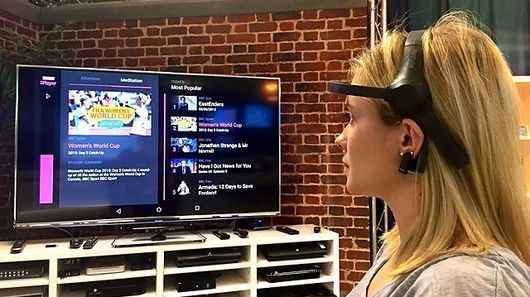 Rahul Kalvapalle — June 23, 2015 — Tech
References: bbc & gizmag
Share on Facebook Share on Twitter Share on LinkedIn Share on Pinterest
The Mind Control TV is a prototype device, developed by the BBC's Digital division, whose workings can be controlled by the mind -- meaning users don't even have to lift a remote control. The device uses an EEG brainwave-reading headset that measures electrical activity in the brain. An experimental companion app allows for two modes of control, 'meditation' and 'concentration'.

The app displays an on-screen bar that measures the user's concentration, and can be used to carry out actions once a certain level of concentration has been reached. Users of the app are presented with five popular BBC shows which are highlighted in turn every 10 seconds. When the user wants to select the highlighted program, they have 10 seconds to concentrate and trigger the program.

The Mind Control TV is admittedly still a rudimentary system, but shows a lot of promise and could be used by individuals suffering from disorders like locked-in syndrome to better access digital media services.