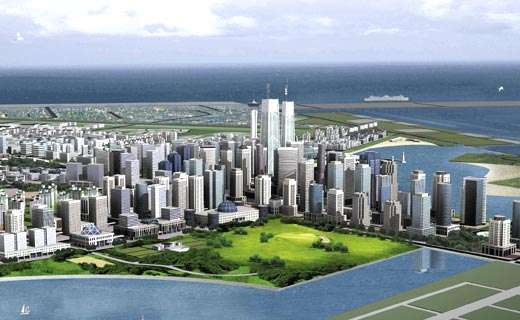 Sogndo City and the U-City

Ja Loqui — December 30, 2006 — Fashion
References: songdo
Share on Facebook Share on Twitter Share on LinkedIn Share on Pinterest
Both Sogndo City and the U-City are government planned future cities that are now recruiting their populations. Songdo is describes as follows, "Developed by Gale International, in a joint venture with POSCO E&C, Songdo brings together the top industry leaders to enrich and build the world's most beautiful, functional and environmentally friendly city."

During the past few years, the sociological debates dedicated to establish the models of present society have given superiority to the theories centered in the instability of the social system. The era of computer science would have, thus, a component of contingency of difficult resolution. It's what one has been called the society of the risk (Ulrich Beck), where: to bigger complexity of the social structure bigger it will be the resistance of all his elements (communication, technology, daily life, work, economy, etc) to maintain a continuous balance. This concept, that had taken a dramatic shade in the attacks from the Twin Towers of New York, has been exceeded when trying to construct the definition of a future city based on a model of totally technological utopia. A model that already is a reality: "the U-City". The project has begun to be made in South Korea.

New Songdo City is metropolis built (it will be finished in 2015) from cybernetic standards and one infrastructure of high technology that would have the function to interconnect each element of the social life. According to KBS World specifies: â€œWhole Regions will be covered with wireless connections to Internet of broadband and each house will be connected to the network: It will equip to the homes with unified systems, such as electronic locks, integrated video and videotelephones. The public services, such as buses and subterraneans, and in the warehouses, a single smart card under this system will be able to be used:â€. The utopian character of the project seems to stand out, according to their creators, the adaptation of all the digital and technical resources to the human factor. Nevertheless, the questions on this matter of the immense complexity of the project give importance to the fluctuation of the balance-imbalances of the own system.
5.6
Score
Popularity
Activity
Freshness
Access Advisory Services