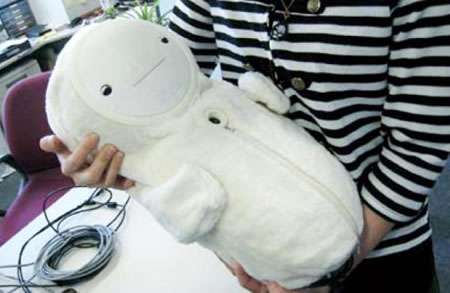 JDurhamII — March 3, 2011 — Tech
References: ubergizmo & gizmodiva
Share on Facebook Share on Twitter Share on LinkedIn Share on Pinterest
Masayoshi Kano's Babyloid is a robot specifically designed to help depressed seniors who also happen to suffer from dementia. Babyloid is full of functions and features that resemble that of a real human baby. Babyloid is 17 inches long and weighs in at just under five pounds to mimic the weight and length of a real baby. The Babyloid robot also features LED lights in its face to mimic real human emotions such as sadness and happiness.

Masayoshi Kano's Babyloid robot can move its arms, head, mouth and eyelids while also being able to make normal baby sounds. Using a microphone, optical and pyroelectric sensors, Babyloid can detect people and interact with them. Although not available to the public yet, Babyloid has been going through rigorous testing and is said to be somewhere in the realm of $600. Upon further testing and a green light from the powers that be, Babyloid will soon adorn senior living communities and hopefully be a productive step to curing dementia.
0.5
Score
Popularity
Activity
Freshness
Get Trend Hunter Dashboard