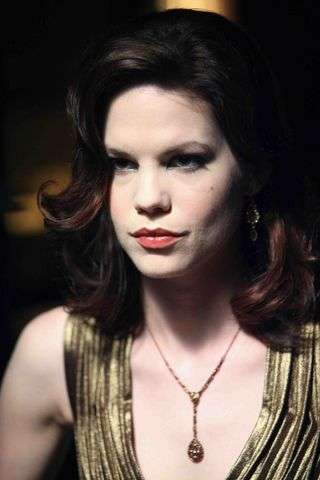 Playing a fiercely strong character on True Blood, Mariana definitely knows what it's like to play a cutting edge role.

1. How do you keep your work on the cutting edge?

I try to keep pushing myself out of my comfort zone when I work on a character. If I can pinpoint a choice that evokes both excitement and a bit of fear I know I’m probably on the right track. Making the safe choice is never as gratifying as challenging yourself. Luckily for me I work on a cutting edge show, so in terms of pushing the envelope most of the work is done for me. I tend to read each script and think, “How am I going to pull this off?”

I try to draw inspiration from other artists, whether it is from another actor’s performance, a book, or a particular piece of music. I often need to spend time quietly alone letting my mind open up and wander freely in order to reset myself creatively. I do have a ritual that sounds kind of silly, but if I’m hitting a wall while working on a character or difficult scene I’ll take a bath. I don’t know why but I get some of my best ideas while running my lines in the bathtub. I’ve heard Mike Meyers does the same thing.

I feel like this situation happens all the time when working in film and television. I’ll arrive to set with a clear idea of how I want certain beats in the scene to go only to have to scrap them for any number of reasons such as: the set is in a different configuration than I’d imagined, due to camera angles the blocking isn’t at all the way I thought it would be, the props are different or have been eliminated, the director has a completely different take on the scene, etc.. It’s difficult, but that’s where you really have to push yourself as an actor to be present in the moment and work with the elements in front of you, instead of shutting down because your original ideas are no longer viable.

4. How did you get involved in acting and what motivates you to continue?

Even as a small child, I always knew I wanted to act. Because the area where I grew up was too small and rural to offer any acting opportunities, I had to wait until college to finally receive training and truly begin my involvement. Once there, I was like a kid in a candy store. I couldn’t wait to go to class every day, and did every play that I could. I think my motivation comes from my inherent love of story telling. When I’m feeling frustrated with my career or down on myself I try to focus on that love. It helps me to think about all of the complex characters I have yet to play waiting for me out there. Well, hopefully I’ll get to play them!

5. How significant are the topics of cool hunting and trend spotting in the world of entertainment?

I would say they are extremely significant. Not only do you have to survive public scrutiny as a figure in the entertainment industry, but also it’s important I think to stay current, aware, and discerning when it comes to the products, designs, and progressions of artists and innovators. What I think is more interesting, however, is how different components can influence each other — how a film or television series can inspire trends in fashion, interior design, or even the popularity of a particular alcoholic beverage. I find that fascinating.

To me something is cool if it’s honest, and good at its intended job or use. If it’s a person, they aren’t trying too hard to please others or be someone they are not. They are honest with themselves, which creates confidence but also allows them the ability to laugh at themselves. If you’re good at what you do but can maintain an honest sense of humor, I think that’s cool.

I consider a trend to be something that hasn’t just peaked the interest of one uniform group, but something that has influenced a change spanning several demographics of people or several forms of artistic expression. That’s usually how I try to distinguish between a fleeting fad and something with a more lasting significance.

8. What is the coolest aspect about the upcoming season of True Blood?

I think the coolest aspect of the upcoming season is the group of new characters introduced. Denis O’Hare plays a significant character in season 3, and he is absolutely incredible. I have been a fan of his work for years and now that I know him personally, I can’t say enough good things about him. I think the fans are going to be blown away by him.

9. Professionally, what do you want to be doing in 10 years?

10. If you weren't in entertainment, what would your dream profession be?

I would love to be an extremely gifted musician — maybe sing and play the piano. I guess I cheated since that’s still in the field of entertainment, but that’s the only thing I still fantasize about doing. If only I didn’t lack the talent . . .

11. What are your favorite hobbies?

Unfortunately I’m not too daring when it comes to hobbies. I’m an avid reader who compulsively keeps a stack of books yet to read next to my bed. I love music, indie rock mostly, so I’m always searching, sampling and buying new cds. I love to go wine tasting, so I try to escape the city and go up north to the various wine regions in California with either my family, friends, boyfriend, or a combination of all three.

12. If you could work with anyone in the world, who would it be and what would you do?

I would choose to work with the Cohen brothers — preferably in one of their period films in the same style as Miller’s Crossing or The Hudsucker Proxy.

13. Who is your favorite actor/actress of the moment, and what makes them cool to you?

I could easily answer that question by listing iconic actors such as Helen Mirren, Morgan Freeman, Meryl Streep, etc., but when asked this question I prefer to point out actors that aren’t as well known or recognized. Someone whose work I’ve admired so much in the past few years is the British actor, Tom Hollander. I was completely floored by his portrayal of King George III in the John Adams mini-series. I rented the DVD again just to watch his one scene over and over again. He seemed like he was about to erupt at any second and yet it was all completely contained. I thought it was brilliant. He’s equally good in the film, In The Loop.

For more from Mariana Klaveno, you can see her in the third season of True Blood on HBO, premiering June 13th.
0.8
Score
Popularity
Activity
Freshness
Get Better and Faster