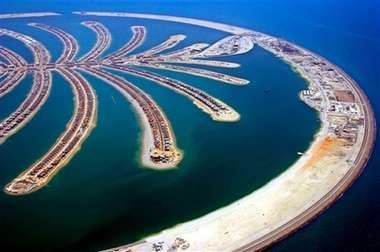 Cool Hunter — August 9, 2006 — Luxury
References: news.yahoo
Share on Facebook Share on Twitter Share on LinkedIn Share on Pinterest
Dubai's uber luxurious man made island, the Palm Jumeirah, is nearing completion. The island will be an offshore city with space for 60,000 residents and 32 hotels. The project cost $14 billion, and is part of Dubai's quest to surpass Las Vegas as the world's leisure hub, and Hong Kong / Singapore as the world's business hubs.

From AP:
DUBAI, United Arab Emirates - With 14,000 laborers toiling day and night, the first of Dubai's three palm-shaped islands is finally about to get its first residents.

The Palm Jumeirah, a 12-square-mile island group, is part of what's billed as the largest land-reclamation project in the world, the product of five years of brute hauling of millions of tons of Persian Gulf sand and quarried rock.

On Nov. 30, the palm will open to some 4,000 residents, said Issam Kazim, a spokesman for Dubai's state-owned developer Nakheel.