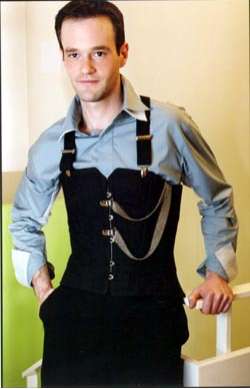 Lauren G — March 1, 2007 — Unique
References: sylvainnuffer
Share on Facebook Share on Twitter Share on LinkedIn Share on Pinterest
Parisian corset maker Sylvain Nuffer began cutting, stitching and boning corsets for men four years ago and now sells some 30 standard models a year at 500 to 600 euros ($823 - $980) a shot, 40 per cent more when made to measure. “I felt frustrated by the lack of choice of clothing for men,’’ he says. “I made one for myself and they kind of multiplied.’’

Corsets for men have a history, he says, worn by medieval horsemen to protect the spine, adopted by bikers today for the same reason. But the real inspiration behind Nuffer’s corset - laced up the back with a clip-open busk at the front - dates back to the heady days of the 1789 French Revolution. Male followers of utopian philosopher and economist, Count Claude Henri de Saint-Simon, at the time adopted the corset precisely because it was impossible to lace up alone. Having to help each other with the ties symbolised the humanitarian helping-other ideals of the Saint-Simonien movement.

Critics derided Nuffer’s early creations, however, saying a garment stiffened with a multitude of bones and stays would be uncomfortable. Not so, says one devotee, Laurent Renaud, who teaches at a fashion school and wears his every day. “I wear it over a shirt or under a sweater,’’ he says. “I use it as daywear or to go out at night.’’ “The problem,’’ he adds, “is you get so used to it keeping you straight that it gets difficult to go without.’’
6.7
Score
Popularity
Activity
Freshness
View Innovation Webinars