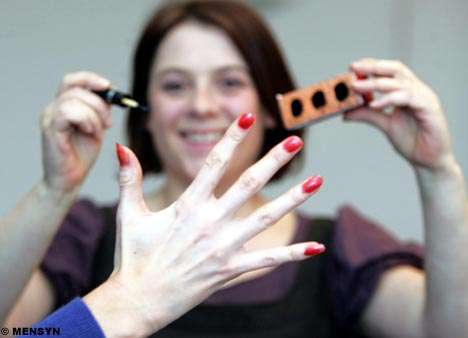 lourdes sanchez bayas — March 24, 2008 — Fashion
References: dailymail
Share on Facebook Share on Twitter Share on LinkedIn Share on Pinterest
Some students at Albion High School in Salford, England invented a "vanishing" nail polish as part of a project with Salford University's school of art and design. In addition, their new invention was inspired by their search for an innovative solution to their school's ban on makeup.

The nail polish is a vivid red outdoors but as soon as you go indoors, the varnish transforms into a pale color that can hardly be seen! The dramatic change is caused by a chemical reaction between the nail polish and the ultraviolet light in natural sunlight.

Enterprise project manager at Salford, Paul Haywood and Sam Ingleson, were so impressed with the idea from the young teens that they began to develop the project further.

"We asked the students to think about products that would have a relevance to them and to research it," Ingelon said. "This led them to thinking about nail varnish - because of the high number of nail salons in the area, they thought it made good business sense.

"Part of the appeal was that the varnish would go clear indoors, so they could wear it in school. But back outside, it would react with the sun and change colour again.

"I think it's a really good idea and a good product. I'm proud of what the young people achieved."