28 Thrilling Theme Parks Around the World

Promoting Promiscuity for Safe Sex
Next
Set of
Related
Ideas 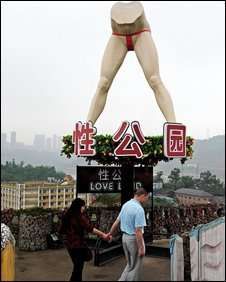 While of course there are many in the Chinese conservative country that oppose the idea of the amusement park, the government is hoping that Love Land will help get rid of sexual taboos and educate park-goers.

The sex park will include workshops such as sexual history, condom usage and sex techniques. Love Land will also be clad in giant displays of naked bodies and genitalia replicas.

And of course, no one can forget about the giant, thonged, lower half of a woman’s body rotating above the entrance. The Love Land sex park is definitely going to have heads turning.

Encouraging Safe Sex in NYC
Get Some Condom Campaign