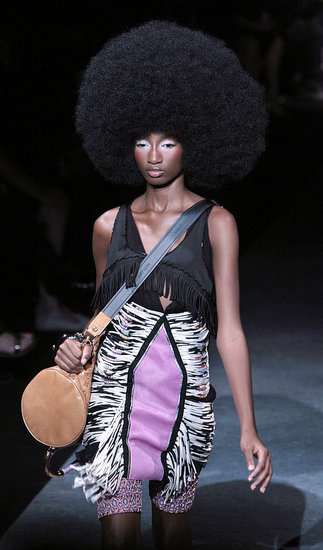 Jacqueline Parrish — October 8, 2009 — Fashion
References: lousivuitton & coutorture
Share on Facebook Share on Twitter Share on LinkedIn Share on Pinterest
For the Louis Vuitton Spring 2010 collection, it was all about Saturday Night Fever, with enormous afro-headed models sporting sixties and seventies era bell-bottoms, bows and tye-dye. I half-expected John Travolta to come strutting down the catwalks disco inferno-ing for all he was worth.

The garments presented at the Louis Vuitton Spring 2010 collection were unique in that it was a style unimpeded upon by any other designer this season. Does that mean, though, that just because no one else has done it, and it was designed by Marc Jacobs for Louis Vuitton that it is a desirable collection? Not in my humble opinion.

While there were some ridiculously awesome bands that emerged from the sixties and seventies, the fashions of those eras should stay exactly where they are--locked away in clothing museums and in closets of the nostalgic.
4
Score
Popularity
Activity
Freshness
Jeremy Gutsche Keynote Speaker