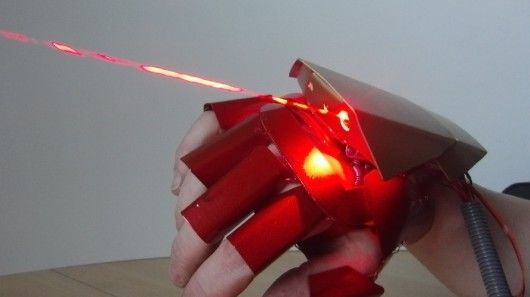 Rahul Kalvapalle — April 22, 2015 — Tech
References: laser-gadgets & gizmag
German laser weapon and gadget enthusiast and hobbyist Patrick Priebe has built several incredibly cool comic book-inspired laser gadgets before, but he may just have outdone himself with this Iron Man laser glove. The glove is complete with sound effects and a 'shell' ejector.

To use the laser glove, the user begins by flipping the device's main switch. This causes a ring of five LEDs around the palm laser to illuminate. Pressing one of the three buttons on a separate wired controller raises the hatch atop the glove. Then pressing another button causes an 800-mW red burning laser to be released. The user can also activate the glove's 3,000-mW palm-mounted laser by flexing their wrist to push in on the pressure plate.

Watching Iron Man, it's difficult to not wish that it were possible to actually wear a gauntlet that fires lasers. With his vision and creativity, Patrick Priebe has made the impossible possible.
3.9
Score
Popularity
Activity
Freshness