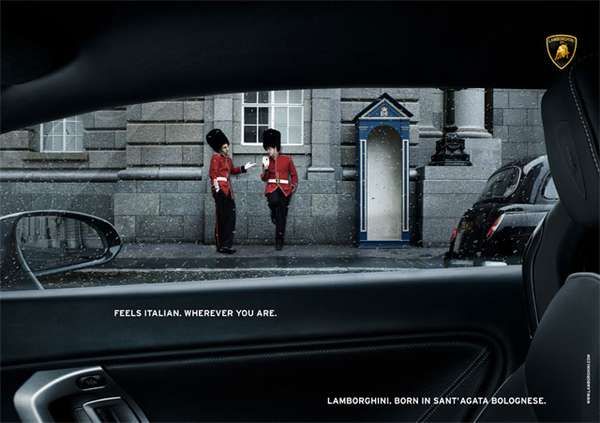 Lamborghini: Feel Italian Wherever You Are

The images show three different views from the windows of a Lamborghini, none of them in Italy.

The first image appears to be in London, but instead of standing in stiffness as they should, the Buckingham guards are leaning against the wall and chit-chatting, one with his hand out, giving a shoulder shrug, in a manner that could only be described as Italian!

The second image depicts a tougher looking biker guy in a rough, desert like setting... online instead of riding a Harley, he's perched on top of a Vespa!

In the third image looks like it's shot in front of an American diner, with two mustached men clad in trucker-hats and flannel shirts. Instead of sipping on McDonalds to-go coffee, they're drinking their joe from tiny porcelain cups. What other way would an Italian drink their espresso?