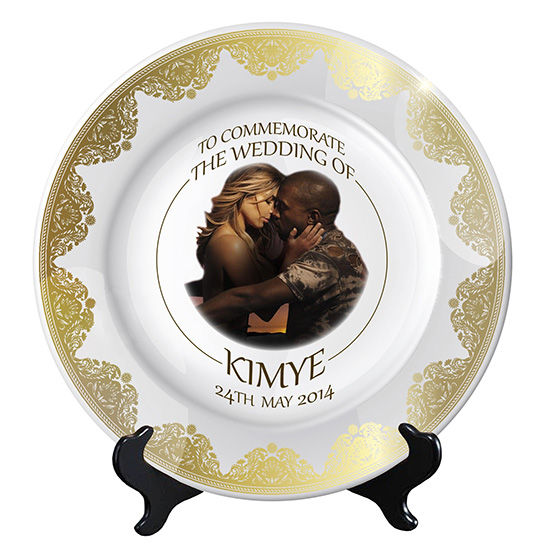 Laura McQuarrie — May 26, 2014 — Pop Culture
References: style.mtv
Share on Facebook Share on Twitter Share on LinkedIn Share on Pinterest
Although we haven't seen much from the Kim and Kanye wedding so far, it probably won't be too long until we do. Considering that this is Kim Kardashian's third marriage and Kanye West's first, the ceremony was most definitely one of a kind. While pop culture buffs wait for Kim and Kanye wedding photos, in the meantime, MTV Style took to Photoshop to imagine what the couple's commemorative plate set might look like.

The sets are opulent and gold-rimmed, marked with dates and phrases to mark the special occasion. Considering that many celebrity marriages don't tend to last, Kimye fans will no doubt be praying that the couple sticks together for at least one anniversary.

MTV Style humorously notes that the sets would only cost "a billion trillion dollars," but the wedding plate set also comes with more coffee mugs with Kim and Kanye's faces on them.
0.3
Score
Popularity
Activity
Freshness
View Innovation Webinars