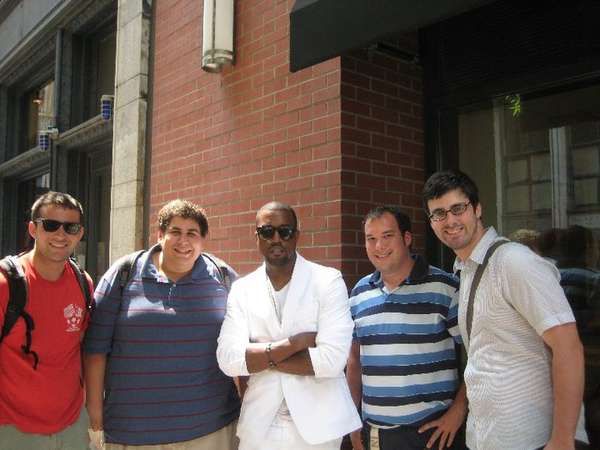 The 'Kanye With White People' Tumblr is Hip-Hop Hilarious

Jordan Sowunmi — August 17, 2011 — Pop Culture
References: Kanyewithwhitepeople.tumblr
Share on Facebook Share on Twitter Share on LinkedIn Share on Pinterest
The 'Kanye with White People' photo blog is a Tumblr dedicated to posting pictures of a (typically) suave looking Kanye West posing with a group of goofy white fans. The site is gripping, alternating between generic, hilarious, and confusing in one fell swoop.

'Kanye with White People' is an interesting photo blog because it actually taps into a major source of controversy for the superstar rapper and producer. Over the last few years, accusations of racism have been thrown at the 34-year-old rapper, a topic he expounds upon on his last two albums, "My Beautiful Dark Twisted Fantasy," and "Watch the Throne." 'Kanye with White People' takes a bit of the sting out of the invective hurled his way by putting a comedic bent on a serious topic.

My favorite shot in the 'Kanye with White People' Tumblr features the Louis Vuitton Don decked out in a white on white outfit, standing in the middle of a group of dweeby looking, permanent 9-5 cubicle types. The photograph perfectly encapsulates why 'Kanye with White People' is a photo blog that grips you -- the shot is absurd, hysterical, and bewildering.
4.4
Score
Popularity
Activity
Freshness
Get Trend Hunter Dashboard