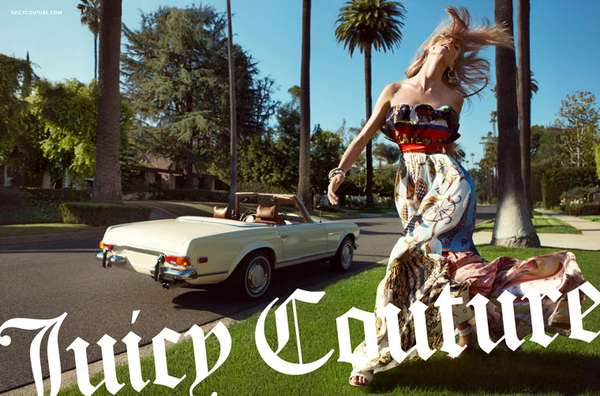 Meghan Young — January 20, 2012 — Fashion
References: juicycouture & fashiongonerogue
Share on Facebook Share on Twitter Share on LinkedIn Share on Pinterest
Sunny and carefree, the Juicy Couture Spring 2012 ad campaign will have women frolicking in the middle of the street just like its feature model Anna Selezneva. As though inspired by the colorful and summery outfits in which Selezneva has been outfitted, the images are equally happy and vibrant.

The Juicy Couture Spring 2012 ad campaign was lensed by photography duo Inez van Lamsweerde and Vinoodh Matadin. Shot in Beverly Hills, the shoot is filled with blue skies and lush palm trees, which beautifully complements the wardrobe being showcased. Styled by Melanie Ward, the collection's spring brights are accented with chic and bold accessories such as jewelry, watches, sunglasses and handbags.