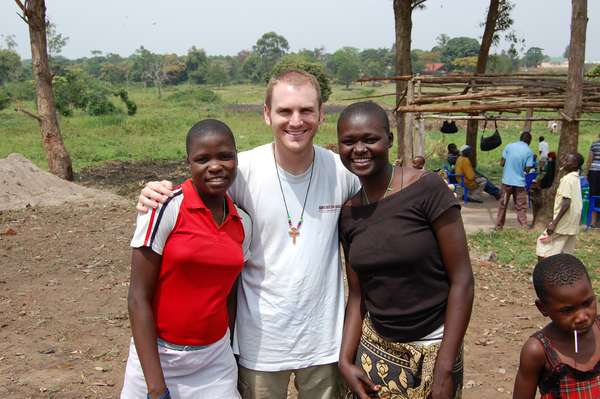 Tiana Reid — April 18, 2011 — Social Good
References: flickr
Share on Facebook Share on Twitter Share on LinkedIn Share on Pinterest
Joe Koenig is the founder of Three Avocados, a non-profit coffee company based in St. Louis, Missouri. Three Avocados, which supports clean water projects in Uganda, was founded in February 2010, after Koenig visited Uganda for the first time. SocialBusiness.org spoke with Joe Koenig on the trip that started it all and his cause-driven business model.

I went to Uganda in January of 2010 on a mission trip. Two things happened on this trip. First, one day, while our bus was stopped, I saw a young man on the side of the road, sitting under a tree with his bicycle. He was exhausted. At that very moment, I realized that I could easily be that young man. I had done nothing to deserve to be born in the United States with so many opportunities in front of me -- just as he had done nothing to deserve to be born into a life of extreme poverty and hardships. I only had what I had by the grace of God. I had been blessed with so much, and it was my duty to do everything I could with what I'd been given to help those in need. I really had no idea what I could do, but knew I needed to do something to help.

Second, while worshiping with a congregation in the village of Bulopa, literally under a tarp strung across a few sticks in the ground, I saw a poor widow place three avocados in the offering basket. For this woman, those three avocados were virtually everything she had. In Uganda, the pastors are not paid. They travel from village to village and rely on God to provide for them. One way they are provided for is through food given in the offering. This poor widow had given all she had, solely for the benefit of others. It was truly an amazing gift.

With some of the others on the trip, I began kicking around different products that could be produced in Uganda and sold in the United States in order to raise money for projects in Uganda. Upon further research, it became pretty clear to me that coffee was the best choice. It was already produced in large quantities and high quality in Uganda, and since it's consumable, we had potential to build a repeat customer base. I didn't want to start a typical charity that relied upon donations, but rather wanted to give consumers a more socially responsible choice when selecting what coffee to purchase. Since the core goal was to fund projects in Uganda, organizing as a non-profit seemed like the best route.

I really had absolutely no intention of joining the non-profit or coffee sector, but my January 2010 trip was truly life changing. I fell in love with Uganda and the people there and just had to do something to make a difference. I returned from my trip in late January, had the organization established in February, and our first batch of coffee was available for order in April. It was a whirlwind few months, to say the least!

My background is in the Information Technology sector. I've had jobs ranging from programming to CIO of a State Government Agency. I have a bachelor's degree in Marketing and own a web development firm in St. Louis, MO, which provides me with a full-time job. My work on Three Avocados is currently done in my 'free time.' I should also note that my wife and I have three small children. Three Avocados is something that I love doing and look forward to seeing it grow!

Social businesses really seem to be the future. There are so many people that I see getting excited about being able to change the world with things they're already buying. It's a really exciting time!

That's a funny question to ask a computer geek. Ultimately, my inspiration truly comes from the people in Uganda that we're working to help. My goal is really to give them an opportunity to make their lives better. I think about the people I've met, the villages I've visited, the orphans I've held, and how Three Avocados provides me with an opportunity to make a difference for them. Those people taught me so much about what love really is -- and this is the least I can do to repay them for that amazing lesson and everything they've given me.

I think the best way to reset yourself is to really study designs, concepts, and ideas that you like, but that you know are also effective. I spend a lot of time researching how other organizations, both for-profit and non-profit, brand themselves and communicate their messaging. When we're working on a new campaign or design, I like to really step back and ask, "What are we trying to communicate?" And once we answer that, I like to look at it from the perspective of the viewer and say, "And why do I care?" If we can answer that question for the viewer, we've accomplished our goal.
2.6
Score
Popularity
Activity
Freshness
Jeremy Gutsche Keynote Speaker