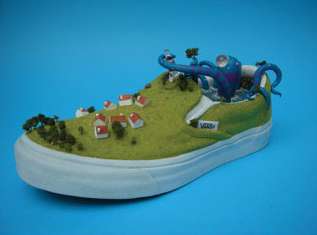 Jethro Haynes Creates 'The Amorous Octopus' on a Vans Slip-On

Alison Heller — April 9, 2010 — Art & Design
References: jethrohaynes
Think it's irritating to get a pebble in your shoe? How about an octopus? Jethro Haynes created a diorama on a UK size 8 Vans slip-on shoe. Created with mixed materials, Jethro Haynes' scene, "The Amorous Octopus," depicts a tiny seaside town on the front of the shoe with an ocean in the foot opening. A giant octopus rises out of the water, dangling his tentacles over the edges of the shoe, and wraps one of his arms around the lighthouse of his affection.

Jethro Haynes' diorama looks more like something out of a Japanese horror film than a love scene, gentle as the giant octopus may be. The diorama was created for a Vans custom exhibition, but was never exhibited.
1.5
Score
Popularity
Activity
Freshness

Super-Sized Dioramas
'Eurovisions' is the New Show by Fantastic Norway